Nintendo Switch - Nintendo's Hybrid
Nintendo had a press conference last night giving pricing ($299.99) and launch date (3/3/17) details about their next generation console/handheld. I was very optismistic about the Switch. Nintendo finally having all their great games on one platform sounds like a great idea, and I'm sure it will be down the road.

But the press conference did nothing but lower my expectations. First Nintendo announces they have a new online service, one that requires a monthly fee. Much like PSN and XBL you get a free game per month, one that is (psn/xbl is 2 or more). But not only is it only one game, but it's limited to old roms from the NES/SNES era, and you don't get to play it past that month. Here's NoA's official statement...

"Confirmed by NOA: Monthly free classic game on Switch is indeed only available for that month. More deets on Virtual Console before launch."

The price also seems a little disappointing, $299.99 for such a weak console. But I can live with that, it'll probably drop soon anyway. But they are charging $79.99 for extra controller, that's just outrageous.

The lineup is looking very strange right now, with mostly rereleases of games as far as from 8 years ago (Street Fight 2 HD). Along with some newer games (Rayman Legends, Skyrim, I AM Satsuma, LEGO City, Mario kart 8, PuyoPuyo Tetris).

Nintendo did show two games that looked outstanding, and not surprisingly they're new installments from ZELDA...

Handful of other games looked solid, like Mario Kart 8, and Splatoon. Also Bomberman franchise being revived is a pleasant surprise. I thought that went the way of Bonk's Adventure and Alex the Kid.

More details about the Switch:

When docked the Switch outputs to a TV up to 1080p, undocked the CPU/GPU is downclocked to save battery life, sceen is 720p, 6'2 inches. System specs haven't been officially given, but if the ones leaked are to be believed. Console power is somewhere between a Wii U and Xbox 1, probably more in the middle. 32 gigs of on board storage, mini sd slot for expandable storage.

Some off screen footage of the Switch screen.
https://external-mia1-1.xx.fbcdn.net...lbYQ9ICxQ p13

Launch console is available in two SKUs, difference being the color of the Switch's controller.

And this is what it looks like when a grown man is playing with the upgraded Switch motion controls.

...the event was a bit odd or just very Japanese, but I liked what I saw, enough that I went ahead and pre-ordered. Breath of the Wild, I Am Setsuna, Super Bomberman R, and Had Been Heroes are solid launch titles. With MK8 Deluxe, Sonic Mania, Ultra Street Fighter II (which turns out is actually not a port of SSFII HD Remix), Blaz Blue, and a bunch of JRPGs plus being region free it seems like a win for me. I'm going to the Switch preview event in DC so I'll get to see what it's all about.
__________________

I'm getting it for Zelda.

That trailer was amazing.

I have four games for the Wii U; Mario Maker, Mario Kart 8, Mario 3D World, and Super Mario Something.

The geek in me wants a Switch. I think the idea is pretty cool. The logic in me is saying hell no. I just think Nintendo consoles aren't worth the money. The gimmicks wear off, they're under-powered and there isn't enough games to warrant the purchase. If I think of it in terms of a handheld first, I might convince myself to buy one when Mario comes out.

Quote:
Yeah, it doesn't sound like it's going to be very powerful. It sounds like it might be slightly more powerful than an Xbox One and PS4, but not nearly as powerful as a PS4 Pro or Scorpio. I saw an article stating the new Zelda game won't run at 1080p, which for 2017 is a bit of a surprise.

In terms of using it as a handheld first, it sure would be powerful in that regard. Only thing that sucks is the battery life can be as low as 2 to 2.5 hours.

I'm not going to get one at launch, although knowing Nintendo most people who want one won't be able to anyway. I'll wait a little bit, for some more games to get released.
__________________
"In my time we didn’t depend on high-tech gadgets like you do. We didn’t need a mechanical washing unit to wash our clothes. We just used a washing machine!" ~ Philip J. Fry

Quote:
I'm really not surprised. A lot of Xbox One games don't even hit 1080p and from what I understand, the performance is less than the original PS4. I don't particular care about specs outside the fact that I'm not going to buy a multi-platform game on a weaker system. Nintendo systems have always been first party games only for me, which is basically Mario.
__________________

It's looking like Nintendo has made developers sign NDAs sayin they are not allowed to talk about Switch specs.

But it's obvious it's not nearly as powerful as even the base Xbox One. It's getting a new FIFA game based on the 360 version, Skyrim is not the remaster, but also based on a last-gen version.

It's essentially an extremely powerful handheld, but a very weak console. And that's what has me worried about the Switch. It's trying to be a jack of all trades, but will probably end up being a master of none.

Yes, it's a very powerful handheld, but the battery life is pretty mediocre... It looks a lot less durable than their past handhelds, not to mention 300 dollars seems a bit high for a handheld you might buy your 8 year old kid.

Such a weird product... with that being said I still have one preordered for launch because i'm a big stupid head. 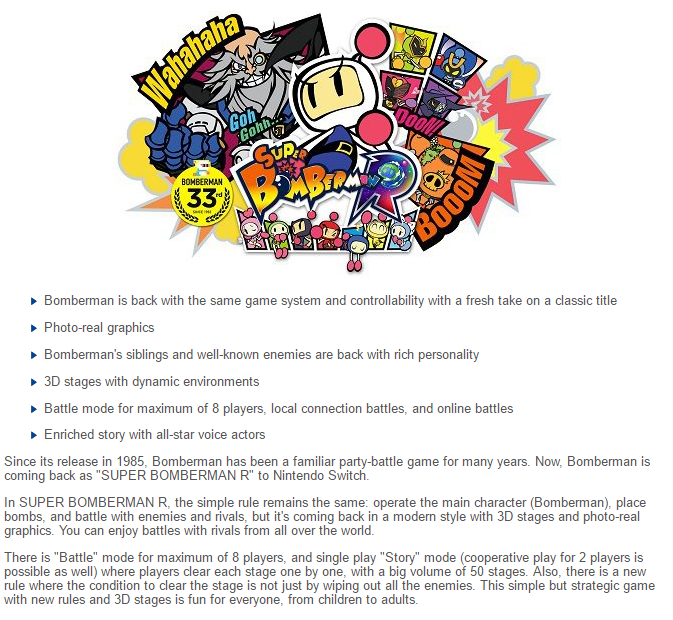 I do love the box art though... 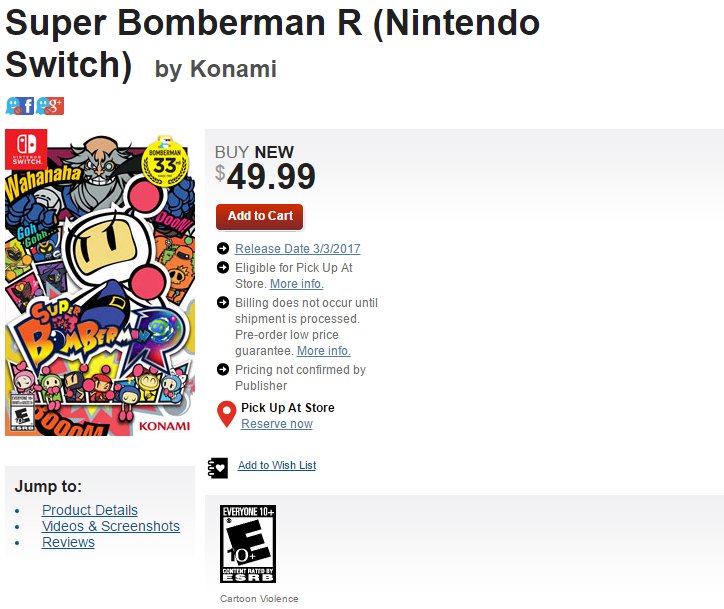 It'll probably be a Wii U 2.0, but the Wii U had some awesome games. lol

I wonder what Nintendo would do if Switch is a failure. 3rd party?

Having a unified portable console is what excites me the most about the Switch.

I really like portable gaming with my 3DS and Vita. (and my retro handhelds)

With my Vita, I found myself wanting to stream games from my PS4 to play in bed or out of the living room, but of course streaming is not quite the same as playing a native game... Also, having some games that came out on both the Vita and PS4 but not multiplayer compatible was a disappointment. (For example, Minecraft)

Being able to play Monster Hunter 3 Ultimate between Wii U and 3DS was great, but that was the only game I could do that.

The Nintendo Switch seemingly fixes these issues as portable and on the big screen are the same platform.

I really don't mind any graphic "downgrades" (I still think the graphics looks fine to me) as it is portable as well.

If I was really concerned with graphics I would play on my PC anyways...

I can't wait for the next Monster Hunter, and even Pokemon.

Would prefer to play both of those games on a TV.

I feel like Nintendo should make a Pokemon MMO for the Switch. That would sell like crazy.

I have not played any of the pokemon games except pokemon go on smart phones. I might give them a try.

I would also love a Phantasy Star game as well, new or even a port.

Why couldn't they just repackage the Wii U advanced controller? Somehow the new one is worth like $20 more?

The whole thing seems like a poor value proposition, and will inevitably end in failure.

Nintendo has had quite a run, but really, they've had more bad consoles than good. I'm surprised they're still around.

The Switch Pro Controller has HD Rumble and a sensor than can detect hand gestures so you could hypothetically play Rock, Paper, scissors with the Switch. So it's not exactly like the Wii U Pro Controller.

The joycon controller (controllers on the side of the Switch) retails for 79.99.

I'm still interested in it, pretty much only for Nintendo's first party stuff (which lets be honest is basically anybody who buys a piece of Nintendo hardware... you know they're not getting it for the third party support), but I didn't pre-order. So I have a feeling that if I get one, it won't be for a long time.

I didn't own a Wii U, but was it really THAT bad of a console? It sold nearly 14 million units and it seems like 20 million is when a console becomes successful.

Quote:
I actually like the console a whole lot.

I think it failed more because the Wii U's marketing was just poor, and a lot of people thought the system was a Wii add-on than a new console. I also don't think The Wii U has ever had a price drop? or if it has Nintendo only did one, kinda crazy for such a poor selling system.
__________________

The Switch already has better marketing and more of a buzz than the Wii U.

Quote:
For the 1st year or so of the Wii U's life I didn't know you could play games with a traditional controller. I thought it was a Wii with better graphics. I don't follow video games as much as I used to but I think that says a lot. Nintendo really didn't market it well.

According to Wiki the launch prices were $350 for Deluxe and $300 for Basic. I thought I would pick one up once prices hit $200 but it just never happened. Nintendo doesn't like to discount their products. 3rd party games tend to drop in price after being on the shelves for a year. Nintendo will keep their games priced at $60 for a few years.

I'm not much of a video gamer these days, but had the Wii U had a substantial price drop, I probably would have picked one up.

And yes, Nintendo dominated handhelds, but it seems they got kinda hung up on the 3DS. I definitely think mobile is killing Nintendo just as much as their continual lack of 3rd party support for their consoles.

Anyone catch the Switch commercial during the Super Bowl?
__________________
Zero point six eight seconds, sir. For an android, that is nearly an eternity.

I pre-ordered one, I will probably re-sell it...we'll see.

I did own a Wii-U and enjoyed it, but sold knowing this was coming eventually...

Kind of annoying how short Nintendo's generations have been lately...

They need to just invest in a big time console and make it last.

Quote:
Or just give up and become a software-only company. I bet Mario on the PS4 and Xbone would outsell Mario on the Wii U.
__________________
Pahn!
“About the only thing Lindsay Lohan and Elizabeth Taylor have in common is that your senses would be assaulted if you spread their legs right now and you’d get some awful disease if you fucked them."