Tattoo questions
If memory serves me correct I think Aeon does them for a living.

Anywho, who her has them and if so where and of what?

I'm getting one next week on my inner forearm and wanted to know what to expect cost/pain wise.

My pain tolerance is pretty high but I have anxiety issues


i'm joking, i'd love to get one, never thought to spend the money on it though


good luck, and may i ask, what are you getting?

I have a sleeve on my right arm with variation and different designs all in a mortality theme. It's about 16hrs of ink.

I've posted this before, but whenever the tattoo topic comes up, I feel this picture should be consulted. 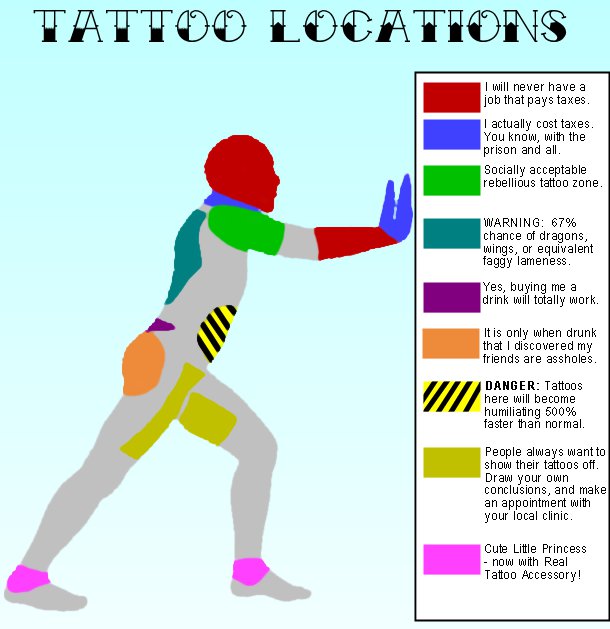 I'll never get a tattoo, but if I did, it certainly wouldn't be visible unless I were shirtless and/or pantless.

. Not sure how arm/head tattoos are in the same category though

Quote:
Forearm tat's can make it difficult to get work in some places. At the Casino I used to work at noone was allowed to have visible tat's except for waitresses.
__________________
Go Oilers!

Quote:
I have a sleeve and for the most part, unless I want them to know, I can go years and people never notice. It's not that hard to throw on a long sleeve dress shirt. In fact, I generally have a very clean cut look so a lot of people are shocked to see how much ink I have.

I am about to get a couple things on my pec/shoulder area too.

Quote:
Yeah, it all depended on where you worked really. One guy that was a pit boss was an old dude from England that used to be a merchant sailor for like 25 years, so he had all sorts of tattoo's on his arms, but since he always had a suit jacket on you never really noticed.

But the Slot department for instance has short sleeved shirts, and well, a dealer at a table wouldn't be able to roll up their sleeves if they got warm if they had tattoo's on their arms. I used to have my tounge pierced and when I got promoted to a Pit Supervisor they asked me to take it out.
__________________
Go Oilers!

Quote:
That is silly to me that a Casino of all places doesn't have any tattoo acceptance. Once the majority of baby-boomers are in the ground, I think the perception of tattoos will be much friendlier.

worked for a company and one of the IT guys had tats all over his body. He had sleeves down to his hands, tats on his neck and even some on his hands. He also had piercings. He was a an in house developer who also helped as an IT generalist with servers and PCs. There was not a problem with this. He was clearly the exception. Tats are not necessarily deal breaker.
__________________

Quote:
Right. I don't hate on it though because I like seeing everybody being an individual with a tribal armband.

In all seriousness if people want art like flying unicorns on their bodies more power to them.

How I really feel is that I do not care and occasionally I will see a nice piece of art.

Quote:
That's how I prefer to be. It's too hard to have fun with your pants on.


Quote:
That's how I feel. I'm not against tattoos per se, but shit, I can't imagine that there would be anything I could get tattooed on me that I wouldn't hate a month later, let alone 20 years later. I change my mind way too damn much.

I feel that people without tattoos have some sort of irrational fear of them and always need to justify why they don't have one or want one when the topic is brought up.

I also feel that people with tattoos are typically morons.

Don't have one, don't want one but don't give a shit if someone else wants one...avoid face/neck though.

Quote:
Where is it going, and how big is it? I scribe about as quickly as I write on paper, so quotes don't take me any longer than a few minutes if it's just in plain cursive. It usually takes me longer to setup and break down than it does to tattoo a few words, unless it's a special sort of writing.

I also tend to hate tattoos with writing on them. The exceptions are larger things written in a more stylized font. My biggest tattoo peeve is when someone wants to write something on tattoo instead of just letting the design speak for itself. They do it ALL THE TIME too:

"I want to get a tattoo of a __________ to represent my late grandmother who was into ___________, and I want it to saw 'Grandma' under/over/through/around it and completely ruin the design, instead of it just being a nice, personal thing, and letting the imagery speak for itself."


Quote:
No arguments there.

Quote:
My fears aren't irrational - they are both painful and permanent.

I stand by my basic idea though. I have friends who have nice work and I've seen more than my fair share of nice tattoos but still somehow feel that, no matter what the design is, there may be some buyer's remorse or a change in tastes over time. I do suspect my tastes are more grounded (or stable) now. I mean I loved my old Misfits shirt at 18 though I doubt I'd sport a similar design these days.

Quote:
I've always thought about getting one, but don't have anything I can think of that would really mean anything yet to me. I'm sure when I lose someone close to me or something to that effect I may want to get one. I don't know.

I always loved my ex' gf's tattoo on her back (Like right under the shoulder blade, not a tramp stamp). She and her twin sister were born in Australia so they got matching pink kangaroo's. I thought that was cool.

"I just didn't realize that freaks like Xeo had been busy building shrines in their bedrooms to the God of PGR2 before I started criticising the game." - DG

Quote:
I dont get why people do those things. Get a quote the grandma/pa said and get it written across the stomach or back.